Happy Friday! I hope you’ve had a good week. There’s a lot happening here, so we’re a little later than usual this evening with this weeks update.

Evolving the blockchain within the Edge Network to work for transactions has involved a lot of updates, such as the addition of persistent storage for transaction entries; changes to the blocktime and synchronisation; and updates to the security model.

This is the blocktime over a 30 minute period: 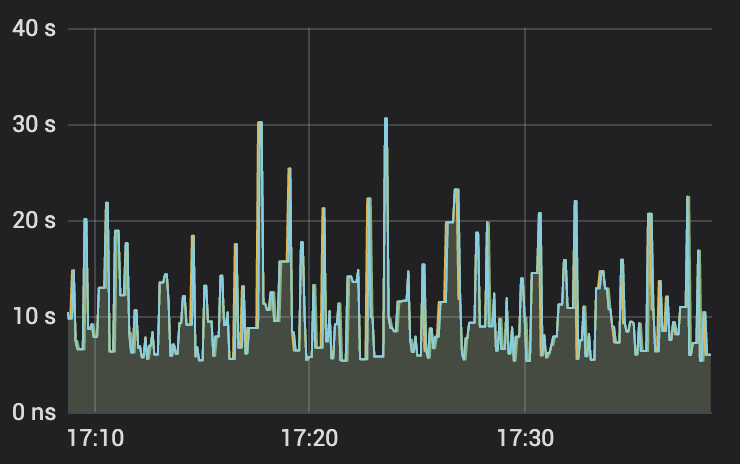 We’re likely to settle on a time of around a minute, which provides a good balance between performance and data resolution.

To get into more detail I have Adam K Dean with me again this week. He’ll provide a deeper breakdown of the work being done on the layer 2 chain:

This week the team introduced a whole raft of improvements to the XE peer-to-peer protocol, adding in fault tolerance for forks and simultaneously mined blocks, and improving the latency considerably, especially important for allowing fast chain synchronisation for new nodes (something that we think will be important in the near future).

The technical implementation of the $XE wallet is now complete. Wallets are generated using the Edge Wallet (which runs entirely in the browser). You generate a private key and there is a corresponding public key, from which your $XE wallet address is derived. When you send $XE from your wallet to another wallet, you sign the transaction with your private key. That signature can then be used with the transaction data to produce an $XE wallet address, which is then compared with the claimed sender to ensure that the transaction was really sent by you. This is now functionally complete.

We’ve made the decision to enforce checksums on XE addresses (based on EIP-55), reducing the chance of mistyping an address. The wallet interface will only allow you to send coins to a valid address, but also the blockchain itself will enforce this, as all transactions are verified before being processed.

Design for the wallet itself moved forward and we’ll start implementing the frontend next week.

We’ll be sharing some screens soon.

In addition to the above, we’ve also rolled out a new monitoring layer among the various infrastructure parts, improving our server monitoring capabilities. But in addition to this, it also hooks into the blockchain nodes, allowing us to record key metrics over time and ensure that the $XE blockchain network continues to run smoothly without having to delve into the logs (which are obviously huge).

To aid stability we’ve put a deployment process in place which enables rolling deployments, meaning that we have a seamless update process that doesn’t risk downtime.

And finally we’ve been pushing the $XE blockchain network significantly in testing (on test.network), which includes measures such as reducing the blocktime to ~5 seconds (as you saw above), simulating network failures, and spinning up numerous new nodes resulting in heavy P2P protocol traffic, and have seen synchronisation of these new nodes working extremely effectively with no degradation of the blockchain network performance.

In other news, like with Host nodes, Stargates and Gateways will be opened up for staking with the launch of the new token. We expect there to be a limited set of additional Stargates added to the network this year, which will be allocated on a first come first serve basis. And Gateways in the network will be made available for staking for the first time, also on a first come first serve basis.

Those of you currently staking will have your stakes ported over to the new setup. There should be nothing for you to do to ensure that your devices are running and generating yield.

The $EDGE<>$XE bridge now monitors gas costs and allows individuals to choose how much they want to pay. This works to the advantage of holders and is designed to keep costs to a minimum.

It updates rates every minute:

Chris and I expect to be sharing the finer points of the tokenonmics of the reissue with you all over the next fortnight.

We’ve also changed the way CDN reports an error in configurations which will improve the way Gateway cache’s results. Strict config errors will no longer be cached for 60 seconds.

The new version of our logging package now no longer triggers an application failure when a Fatal message is reported. Whilst this was designed as an improvement, it had a short term effect of not restarting Stargate when a connection to Consul was severed. We have now patched and deployed a fix for this.

Gateway queue has been working reliably on Mainnet for 14 days now. Some scheduled minor bug fixes will be deployed next week, along with a few upgrades that should improve performance even further.

The Edit team pitched to a major infrastructure provider here in the UK. This one has amazing alignment with the network in terms of service use and network scaling.

A major update to the Ecohustler site - ecohustler.com - moved into final testing. This will enable eCommerce and carbon-offset services via their site. We’ve been given the go ahead to include a “Hosted on the Edge” banner on the site, which will be a good showcase for the network.

And finally, our social activation campaign has kicked off. You will start to see the output from this next week. This includes a reactivation of our newsletter, which will be sent once a fortnight. If you’re not signed up, sign up now: https://edge.network